If you’ve been keeping up with our London living situation so far, you already know that we have moved to the east end, after a brief yet brilliant stay in the south west. But a few administrative duties beckoned us back to the other side of the city, and we happily took this as a chance to float around and continue to explore our brief southern stomping ground.

After a scheduled bank appointment, I had a sickening craving for KFC, which seemingly bookends Streatham High Street, where our bank branch is located. The craving was unashamed hunger and nothing more.  It had been a few hours since breakfast, but luckily Patrick kept the focus on what we needed to do and where we needed to go. In this case, continuing to nearby Brixton.

Brixton Village, which I will describe for our Irish readers, is something like the English Market in Cork, but smaller and more focused on restaurants rather than retailers and stalls, while it’s also comparable to Dublin’s Epicurean Food Hall. People are always talking about this place, notably singer Jessie Ware, who Russell adores. She’s a Brixton native and a champion of this homely haunt so needless to say, the destination was set.

We were a bit unsure of what to expect, size-wise, but there are about 15 choices of eateries, from greasy spoons to artisanal sandwich shops, as well as international fare from Mexico, Spain, Asia and the Caribbean. Near one of the exits of the arcade sits one very colourful, attractive looking restaurant, if a little hipster, called CHICKENliquor, which is only a recent moniker change as it went by Wishbone for the first two years of its life.

Their speciality is free-range chicken, almost exclusively thigh meat, with no other meat or fish on the menu. No vegetarian option either, save for some sides suitable for both carnivores and herbivores.

CHICKENliquor has the look of a casual bar with nibbles being served, as the immediate entrance and small downstairs dining hall is overseen by a nicely stocked bar and lots of graffiti on the walls. There’s tall tables with stools underneath and a couple of group tables outside, which are always full almost every evening they open. Upstairs there is a large, narrow dining room with lots of tables for two and some larger, central tables for groups. It gets noisy, hot and extremely busy in the evenings, especially on the weekends – so prepare for that! 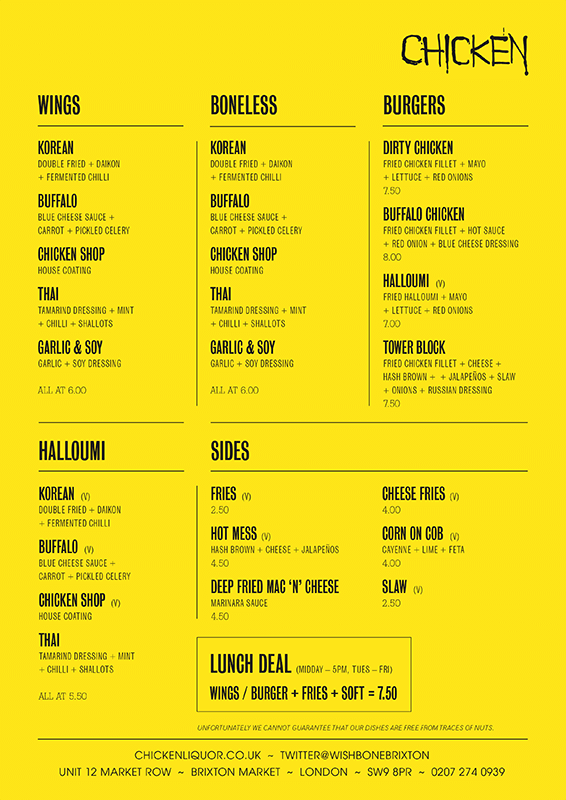 The menu is simple: for mains there’s chicken sandwiches and wings, as well as simple fried chicken pieces on offer. For sides, a wide choice of carbs and vegetables. Both the thighs and wings are flavoured, three varieties of each that are specific to their cut. Wishbone also do cocktails, the menu for which reminded us of a pick and mix, but for adults with a rising thirst and a spirit soft spot.

The decor is bold, arty, young and unique. Amusingly, the toilet doors don’t indicate gender by logos or colour, they are emblazoned with either “cocks” or “hens” – quite a canny representation of this establishment’s attitude and humour. The service is always warm and welcoming, and extremely laid-back.

I always order the Korean style chicken, which came with fries and a can of lemonade in the lunch special. Spiced mayo and thinly sliced daikon radish gave bite and light heat to the crispy fried thigh meat, served with lettuce in a soft yet crisp roll, a banh mi of sorts. The nearby Louisiana hot sauce on the table was tentatively splashed on to taste, until it was liberally nearly soaking the sandwich in its warm and sweet heat – Patrick

I chose the Tower Block, with the same lunch deal accompaniments. I really didn’t know what to expect from this dish. For a start, I have never heard of chicken thigh in a burger. The biggest selling point for me was the hash brown among the rest of the fillings. When it arrived, it looked like a simple chicken burger, nothing overly special about the bun visually but it tasted so fresh, as a burger bun should. I forgot to ask for no jalapeños, and instead of ruining the architecture of this beauty, I left them in to see if I could handle them. Luckily, I could.

The chicken was piping hot, with a very crunchy, satisfyingly crispy coating. The thigh meat had such an intense chicken flavour. Along the creamy slaw and the mushy hash brown, the entire burger was simply stunning. Unusually for me, though, I didn’t leave with that food baby feeling, which to me is a huge positive; there’s nothing worse than feeling fit to explode just because you have indulged and thoroughly enjoyed a good burger!

The fries, also served in little white paper bags, were above average standards. Even when declarations of fullness were announced, temptation gave way to salvaging a few more before they were (thankfully) taken away – Russell

CHICKENliquor is just around the corner from Brixton Underground Station (Victoria Line), also near a hefty number of bus stops too. It’s actually located in ‘Market Row’ which is the smaller, narrow sister to the larger ‘Arcade’ across the street. This is the perfect place to nip to for a filling and satisfying lunch, but also ideal for a weekend evening get together with friends – where a casual, filling dinner leads right into drinks and loud music.

In terms of affordability, it is a just price for the offering compared to similar eateries of its kind. Taking into account their chickens are free-range when so many choose low welfare, battery chickens instead, it is clearly worth the few extra pound over a competitor. Dubliners who drool over the likes of Crackbird and Jo’Burger, you need to try this one on for size!

Quite happy we didn’t go for that KFC now….