March 2016 we’re declaring as ‘Irish Month’ on our blog. We’re sharing recipes of our updated takes on Irish classics and we’re also talking to some of our favourite Irish figures in food and travel in an interview series, shining a light on some of our favourite Irish friends. Follow the series in full as it’s published, but next up is an Irish chef who’s swapped Ireland for the bright lights and cool breeze of Los Angeles, chef Stuart O’Keeffe.

It’s a long way from Tipperary to LA, but that’s where Nenagh native Stuart has set himself up. Now based amongst the boulevards of West Hollywood, Stuart has made a name for himself Stateside with high-profile private chef gigs, regular TV appearances and now his own cookbook… if you haven’t heard Stuart’s name before, you’re about to hear and see it everywhere. Oh, and he’s very easy on the eye too, so be prepared to swoon!

One of Ireland’s most notable celebrity chefs, Stuart is probably most recognised in Ireland for his TV3 series Stuart’s Kitchen. Stuart originally trained in Dublin Institute of Technology (D.I.T), where he got a BA in Culinary Arts – really the only professional cookery course in Ireland worth talking about, followed by Ballymaloe Cookery School – and then went about his way on a food journey.

Stuart luckily was met with opportunities and offers by the bucketload in America, but it took a hard slog of working in kitchens and making connections where he had none to get him to where he is today. Having spent a number of years as brand ambassador for Tupperware, touring North America and demonstrating to crowds and advising on kitchen know-how,  Food Network snapped him up to star in Private Chefs of Beverly Hills whilst AOL also featured him in their series Kitchen Daily 101.

So was it like in the movies, chasing the American dream in search of fame, fortune and a name in lights? “I always dreamed of living in the States,” Stuart admits, “I lived in Ireland all my life and I wanted to see what the States were like so I took the leap.”

Originally landing in Napa Valley, the heart of the west coast’s wine country,  the culinary philosophy immediately rubbed off on Stuart, re-inforcing the fine dining principles of simplicity, respecting good ingredients and delicately enhancing their natual flavours and textures. The same respect and understanding of terroir and flavour of wine absolutely translates to the ingredients grown in the area.

Beet and burrata to get things going #appetizer #food

But after a while there, the silver screen was calling his name and he made the decision to move to Tinseltown. He writes on his blog: ‘Leaving Napa was difficult, but I had begun to shape a picture of what I wanted my future to look like, and that included sharing the love I had for cooking. My mom passed it to me, my education enhanced it, and I was ready to lavish it on others. However, the thought of being a formal educator didn’t feel right- I wanted to reach lots of people in an approachable way.’

He was destined for TV, and says “I loved making my AOL show KITCHEN DAILY 101 in particular. It was so fun as the team was so good. Everyone had their shit together and, to me,  that is everything when I’m on set. I like to feel comfortable on set and when it’s a mess then it affects how I am on the show”. Stuart is now publishing his own Youtube series over the past year but more TV work is planned for the future.

Stuart’s long-awaited first cookbook has finally been released, called The Quick Six Fix, and he’s set to be a household name and cookery shelf regular in homes on both sides of the Atlantic.

“I actually wanted to do this show as my second series on TV3 but that never happened, so this concept has been in my head for years,” Stuart explains. “I always found the issue with people cooking was the prep and the mess they create after they are done. I liked the number six and truly believe that with six ingredients and some pantry essentials you can do A LOT.” In Ireland, the book is available to order from Dubray and Eason whilst you can also order a copy from Waterstones and WHSmith in the UK.

Talk, of course, turns to food, memory and recipes and his earliest recollection of being in the kitchen was “making pavlova with my aunt Derry in her kitchen. I was obsessed with the crust of the meringue.” And his go-to dinner party recipe when cooking for friends? “Braised short ribs. Winner. Everytime,” he declares. We absolutely agree!

This now over at chefstuart.com #shortribs

He’s been back in Ireland sporadically over the past few years – from his TV3 show to collaborating with Bord Bia and also demonstrating at Taste of Dublin – and like all good Irish boys the scent and taste of an Irish breakfast and soda bread warm from the oven slathered in fresh butter is enough to cross oceans for.

Probably the most beautiful day today ever. This is were i grew up. Not bad at all. Loving Ireland right now. #ireland whos coming ? #nenagh

So what about returning? Is it an option to come back home on a more permanent basis, we wonder? “Look, I go where the work is. I love to come home to Ireland and I’d love to shoot another series back at home”. Definitely not a ‘no’, we both surmise…

Now. If you know us, you’ll know we’re dog-obsessed. Our Instagram feed is Westies, food and men in no particular order. No joke. Stuart just so happens to have a gorgeous little pair of Westies so naturally we’re absolutely smitten. We wanted to know if they love having a chef as a Dad and whether they get treated with his delicious cookery.

Stuart says: “I adore my two little ones (Jack and Bo), they’re my best buds, it’s hilarious Bo will always watch me cooking; she’s like a person. I try to not feed them my food as they will forever beg from me… but sometimes I’ll throw them some meat if I got some leftover.”

After all that food talk, we couldn’t end this without one of Stuart’s favourite recipes from his new book and – believe us – you’ll be seeing this in one of our Sunday morning #SundayBrunch pics on Instagram very soon as it sounds dreamy. Enjoy! 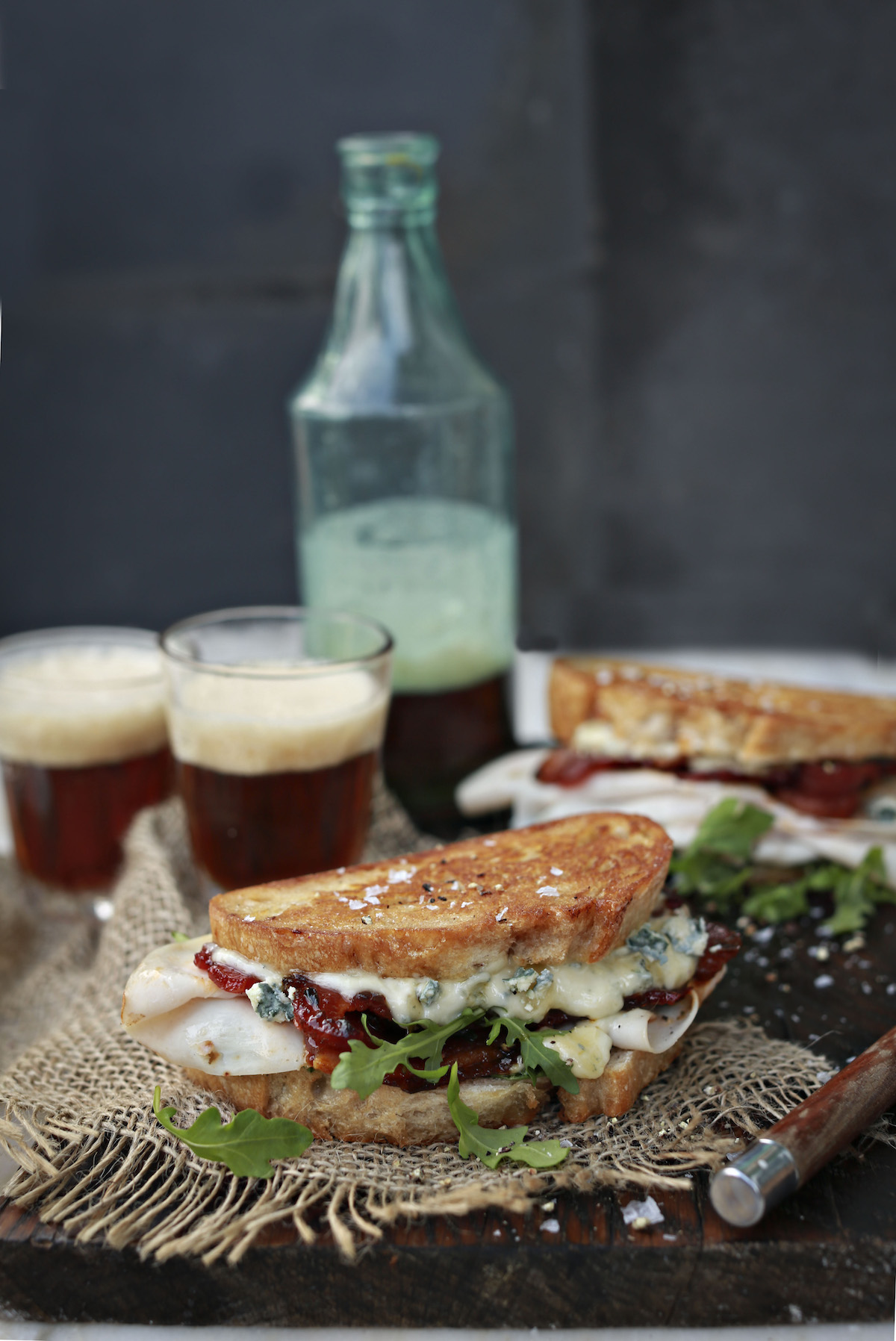 Stuart says: “Bacon is probably my one true addiction. The sugar and spice along with the salty pork here makes this sandwich incredibly hard to put down. Cook your bacon like this and you’ll find an excuse to make this every single day.”

2. Mix blue cheese and mayo in a bowl together. Set aside.

3. Place 4 slices of bread on the counter and lightly spread with butter.  Flip over and spread with blue cheese mayo. Top with bacon, turkey and rocket.

4. In a large non-stick pan, melt 2 tbsp butter. Put two of the sandwiches on the pan, top with two remaining  slices of bread. After 2 minutes, using a large spatula, turn sandwich over and cook the other side until golden brown. Repeat with remaining two sandwiches.