Without sounding like grumpy gits in the corner dissing others’ work, what those articles are often peddling is a load of crap.  We wanted to offer a tongue-in-cheek antidote to the nonsense, but also get real about social media milestones, so here’s how we got 10,000 followers on Twitter in four long years! 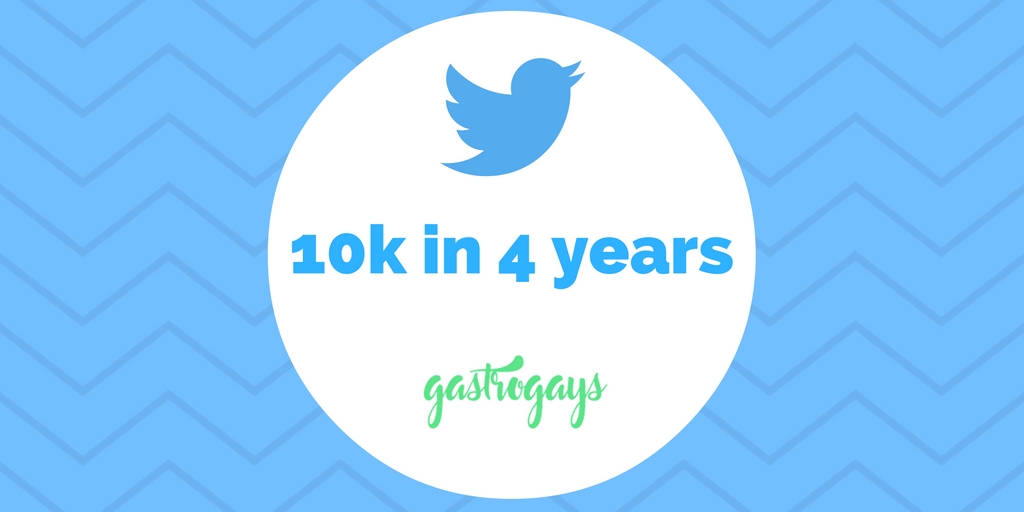 Most of the time, a social media account grows rapidly because they fall into one of the following categories:

And sometimes, a person has managed to grow their account because they’re talented at what they do; word slowly starts to spread; their audience grows organically whilst encouraging consistent engagement; and they get kudos from near and far for being different, unique and bringing something new to the table.  Frankly, whether it took four minutes or four years, this is how we feel we grew ours.

After blogging, and tweeting all the while, for just about 4 years, we’ve reached a really nice, round number of an audience on Twitter: 10,000 different people or profiles. Of course, there will be naysayers lining up to declare to us “that isn’t *that* great, there’s this other blogger with 200,000 followers” or “well one of the Kardashians has 18 million followers and rarely tweets”. We’re fully aware of all of the above and that there are dogs on social media with audiences we could only imagine in our wildest dreams. We know – we follow tonnes of them ourselves!

For us, 10K on any platform is a huge achievement, and a great milestone for us personally and professionally. GastroGays started on Twitter – not sure how many of our readers and followers would remember that? Before there was a blog there was a simple hashtag! We started tweeting #GastroGays on both of our personal profiles whilst exploring the food scene of Dublin and we thought it was so catchy and engaging that we needed to turn it into something concrete. Now, here we stand, four years later having created something from literally nothing.

Through determination, GastroGays has grown into a collection of articles, recipes, interviews and features published online with an active audience of thousands of followers (many of whom have become great friends of ours) and lots of heartening opportunities that we’d not have been offered if we were just “Russell & Patrick down the street”.

Advice 1: Have the determination, drive and focus and stick to it. As RuPaul calls it, “stick-with-it-ness”.

We committed very early on in this journey that we wouldn’t ever employ any untoward methods to gain a following. It’s cheating. We wanted to be truthful, honest and organic from the start and in some cases, it’s felt like a curse but our pride couldn’t be dented. We’ve had so many opportunities lost purely on the basis of a not having ‘X’ amount of followers on a particular social media platform, let alone however many were reading our blog.

You see, there’s a never-ending race to the bottom in the world of the internet. Everything is based upon a top-line big numbers and sexy stats. Popularity is the ultimate goal, and desired for the vain hope of validation, but popularity is meaningless if you aren’t delivering the goods. Half the time, supposedly ‘popular’ people (whom you might know as ‘influencers’ too) are total bores anyway. Believe us, we’ve suffered through enough events, dinners and meet-ups with these people to know. There’s a stark difference between ‘online personalities’ and who lots of these people are offline, trust us. Social media has given everyone a voice, but truth does not belong to the one who shouts the loudest.

Twitter is our favourite and strongest social channel. Getting verified is VERY special to us! So happy right now 😌😌 pic.twitter.com/NZ4vC0XUFy

Twitter is by far our favourite social media channel. It’s our strongest, most active platform and where we’re the most comfortable.  We like to describe it as the best break-room on the planet. Imagine: you have that person who no matter what will make you laugh, another who always has an article to share you always enjoy reading, someone in the corner offering a delicious dish to eat, a person controlling the music curating an incredible selection of songs you’d have never discovered alone. That’s our way of seeing the Twitter community.

Advice 3: take the good, the bad and the in between

Twitter has been a real rollercoaster, though. It’s offered a connection and an open method of communication with some our idols, a handful of whom have even followed us too and have become friends. We’ve also met so many people online who have become some of our favourite company to keep in the world. But it’s not without it’s problems. Yes, trolls lurk almost under every bridge, but brush past that and appreciate the richness of a community it offers. At worst, there’s a group of profiles who are hell-bent on contradicting everything we say or do, questioning our integrity or undermining everything we share, all the while trying to do the exact same thing that we’re doing. We’ll take the imitation as flattery, thanks.

Advice 4: be active, engage and interact

As we happily trot on the path of Twitter, however big an audience we achieve, we have one thing we’d like to see more of: engage and interact with us! Hit reply instead of just liking a tweet, ask us a question out of the blue, retweet more of what you like to your followers to spur on further conversations. It’s really meaningless to have a following if there’s no communication and interaction. Twitter, and social media in general, would be nothing without YOU.

We wouldn’t bother putting four years of time and work into it if we didn’t get feedback, friendship, fiery discussion and friendly banter. If all of that stopped tomorrow, so would we. You make it what it is, and it’s a special place to us. Thank you for coming along on this adventure with us!

All that being said, you’ve probably clicked through for a couple of genuine tips, right? Here’s what we feel is the best way to grow your social media accounts organically, honestly and slowly.

To be totally honest with you, part of the growth of one social channel is in part, thanks to another. Push to and from your other channels, platforms and websites, but still remain active in different ways on each one. The audience we’ve got on Instagram is very different to our Twitter one, likewise for Facebook, YouTube, Snapchat etc… Know the tone, voice and purpose of each one, and avoid blending all into the same thing. If your Twitter timeline is purely word vomiting your latest Instagram pics or automated blog links, you may as well get off Twitter.

If we stop looking at followers as a number, and pretend they’re paying subscribers, you may feel a bit differently. A person likes the cut of your jib, they click follow and invest in you – they then expect value in return. If you’re pretending to be something, someone or somewhere that you’re not, it isn’t going to be too hard to find your flaws.  How many times have you seen an account schedule a tonne of tweets through the 24-hour cycle, but take days to respond back to you? Automation or scheduling has its place, but don’t try to pull the wool over peoples’ eyes.

This is a tough one, because when you start off as a Tweeter, Instagrammer or whatever you really are just finding your feet. But being true to yourself, your talents and your goals however big an audience you create is so important. Trust your own voice – social media gives us all a platform and you’re the best version of you that there is, so embrace your personality to the max.

4. Be Trustworthy and Authentic

In the age of influencers, trust is vital. Being authentic is vital. Being likeable is vital. For example, one of our worries every single year is the fact we go hard-and-heavy on Eurovision in May each year. But it’s an integral part of what we do and it’s a joint passion of ours, so if we didn’t vocalise it we wouldn’t be selling ourselves in the unique way we do. If we kept it hidden, then we just wouldn’t be truly us!

5. Don’t Be One Of Those People

Don’t be part of the problem, be the solution. Be the antidote. You know what we mean: don’t buy followers. Don’t use sites and apps to auto-comment on certain hashtags. Don’t follow tens of thousands of people you’ll NEVER interact with, in the hope that they’ll all swarm over to you. Just let it be. Your work will speak for itself.

Duh! With all this talk of Twitter and everything…